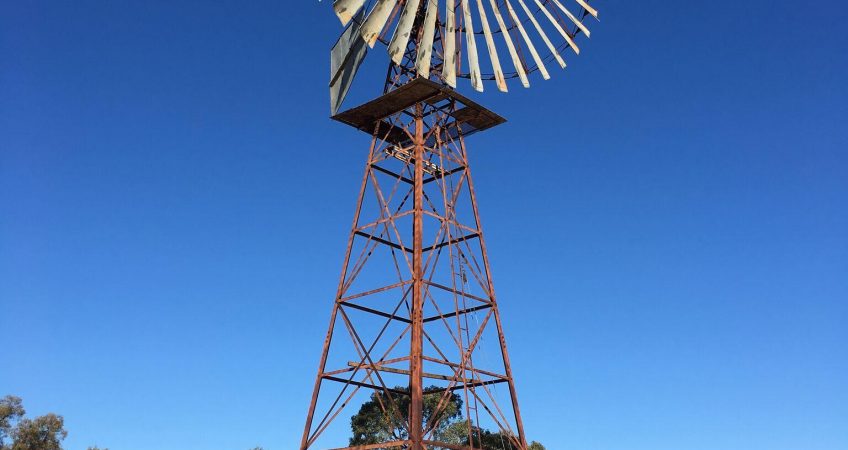 On the Menindee-Ivanhoe road in NSW is a glorious reminder of our pastoral history in semi-arid rangelands and Australia’s engineering past. Breaking the endless line between clear blue skies and a shimmering horizon is the silhouette of a huge 30 foot Comet windmill perched atop a 60 foot tower.

Big Ampi Station, like most of the Western Division rangelands has its carrying capacity dependent on the reticulation of bore water. Prior to mains power being established this windmill was the backbone of the stations water reticulation system, lifting water from a 30 metre bore and pushing it to water points as far as 18 kilometres away.

This windmill was built in the Sydney Williams factory in Sydney in 1932. The fourth of only 25 Comet 30 foot D pattern windmills ever built. Originally it went to Alpha, Queensland, but at some later stage was relocated to Big Ampi Station, Menindee, NSW. The windmill has a 14 inch stroke and has its speed self-regulated by tail position to approximately 19 revolutions per minute. The torque generated in a stiff breeze by such a large fan at that RPM is incredible. Comet production of this size windmill stopped in 1956, but has recently re-commenced. The current Comet catalogue lists the mighty flagship 30 foot windmill as available, once again.

For quite some time the windmill has not been an integral part of the modernized Big Ampi water system. Despite this, the windmill has been regularly serviced by Paul Morgan of Jamestown, SA. In 2015 the windmill suffered a failure of its bearing turntables (these turntables were subsequently found to have been non original copies). This significant failure required the windmill to be secured and put the entire structure at risk.

The Big Ampi owners recognized the rarity of the windmill and its historical importance. When so much of our pastoral heritage is being bulldozed into a hole when no longer essential to operations, the Big Ampi owners made a philanthropic commitment to not only protect the windmill, but to restore it to original working order and integrate it into an otherwise modern water reticulation system.

David Catchpole, the new owner of Comet Windmills was very supportive and facilitated the manufacture of all the required parts, to original specifications. The head of the windmill is estimated to weigh 3.5 tonnes. Attard’s crane hire of Broken Hill provided a crane that had the reach and lifting power for the task at hand. Paul Morgan and a team of 3 men completed the required work over 2 days.

The windmill is now fully operational, performing just as well as it did in 1932 and contributing to the water infrastructure on Big Ampi. The Big Ampi owners feel the windmill serves a poignant reminder of the development and watering of vast tracts of pastoral country, Australia’s engineering history and the importance of protecting our rural heritage for generations to come.